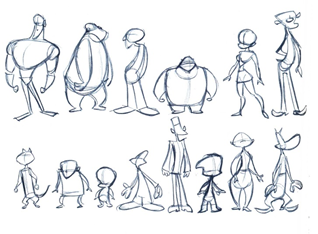 A challenging part of animation remains in the character design choices. The difference a successful character can provide to conveying your image cannot be overstated. A study in 2011 studied the relationship between many aspects of animation and the customers’ tendencies and feeling. The study found that a relatable character was better at influencing the customers’ behaviors. Another 2008 study found that animated ads had better customer conversion rates by 20% than non-animated ads. This emphasizes the need for creating a proper animated character that appeals to your targeted demographic. Creating a character that resonates with your audience can be challenging. Here at REEEEL Animation, we understand the design choices that can help you engage and attract your influence. With years of experience and market research, we have the tools to create the image you want to communicate.

According to numerous market research, an eye-catching character is the most important factor. However, creating a character that resonates with your audience, doesn’t mean the character has to be similar to the targeted demographic. Children were more likely to be attracted to a product if it was associated with an adult female that looked similar to their mother, instead of a cartoonish character of child. This was attributed to the subconscious trust that children have in their mothers. Children do not always trust or resonate with other children. Small psychological factors that can pass unnoticed like the example mentioned beforehand show that character design and creation is much more complicated that previously thought. If you have any questions or would like to have your character designed, feel free to contact us. Your needs are paramount to us!